Baroyeca continues to deliver bonanza grade silver of up to 2,544 g/t Ag at surface in its high-grade silver-gold Atocha property (Colombia).

VANCOUVER, B.C. – BAROYECA GOLD & SILVER INC. (the “Company”) is pleased to announce additional assay results from new parallel vein discoveries and from the western extension along strike of the veins discovered at the La Ye vein system at the Company’s flagship Atocha project in Tolima, Colombia. The discovery of these veins and initial sampling results were reported earlier this month (see news release dated July 6th, 2021).

Baroyeca increases the footprint of the high-grade silver-gold vein system at La Ye and samples bonanza grade silver of up to 2,544 g/t Ag at surface. The highest silver and gold assay results were found in a series of infill outcrops discovered after following the inferred trace of the veins and surface geomorphological features identified from a Lidar DEM survey analysis along their strike length. To date, the vein system has returned consistently high silver grades over a strike length in excess of 500m, and which remains open in both directions (See Fig. 1).

Raul Sanabria, P.Geo., President of Baroyeca commented: “We are truly mesmerized by the silver grades our sampling is obtaining right at surface. The La Ye target is growing exponentially and the potential of its footprint and size is proven by the number of veins we are finding there. The continuity of the silver grades along the extent of the veins is remarkable compared to other nearby prospects and mines. La Ye is the first target of many we are testing, and it was only selected first because of its great access. We are just starting to scratch the surface of this project and having added Veta Grande to the La Ye target we are consolidating an exploration block of 1,000m x 500m which potentially hosts closely-spaced veins in more than 6km of vein strike length. La Ye-Veta Grande system equals to just 5% of the Atocha property and with over 2,600 hectares yet to explore, we have the possibility of discovering many more high-grade veins before we move to start drilling. Baroyeca has identified more than 10 additional large deformation corridors and we have found high-grade silver-gold mineralization in all of them, which is proof of its enormous silver and gold potential”.

The central part of the system is comprised of three large major parallel veins and several low angle associated vein sets. The best sampling results have come from an exposure of the vein along the San Antonio creek in the north facing slopes with assay results from rock chip samples returning 2,544g/t Ag in one vein and 1,317g/t Ag in a parallel vein. Other samples returned more than 300g/t Ag (see Table 1).  The westernmost sampled zone returned 709.45g/t and 562.6g/t AgEq. 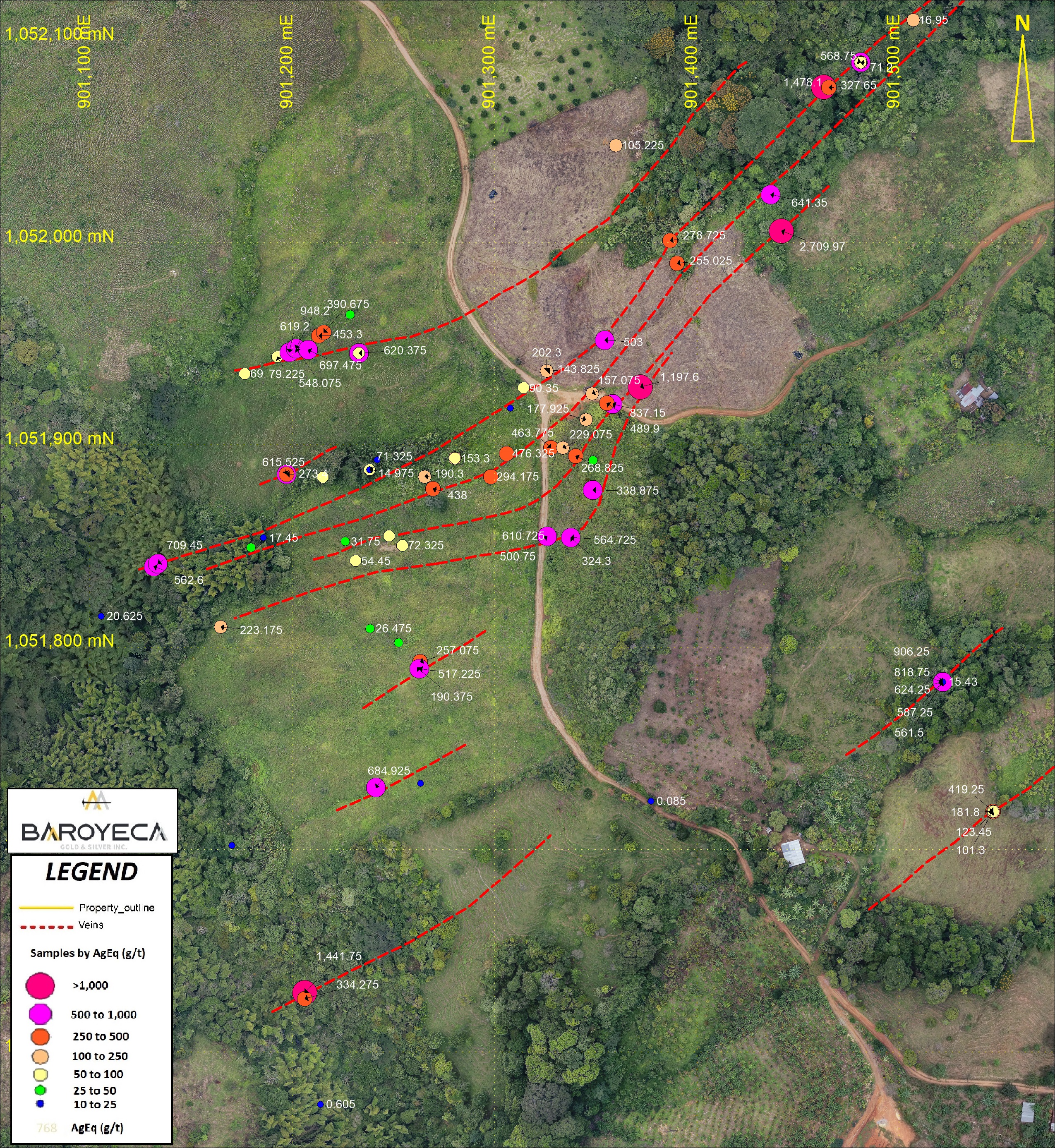 The southern part of the vein system is not as well exposed as in the other zones with only three vein outcrops found to date although the silver values in rock chips are still consistently high, particularly in the southernmost vein where assay results returned 316g/t Ag and 15.01g/t Au (1,441.75g/t AgEq).

Close to the southernmost outcrop found at the La Ye vein system, another vein corridor has been identified which suggests they may form part of a much broader system. Historical rock chip samples by a previous operator reported 766g/t, 716g/t, 511g/t, 354g/t and 338g/t from one outcrop location and 282g/t and 147g/t from another outcrop of a parallel vein. The trend indicates they are part of the Veta Grande vein system where a recent outcrop discovered by Baroyeca on the western extension (see news release dated July 6th, 2021) returned very high gold and silver values up to 14.4g/t Au and 420g/t Ag and 1,500g/t, 1,414.25g/t, 934.22g/t and 886.4 g/t AgEq.

Baroyeca’s field team is now moving to the Tavera-Rancho Viejo zone where several parallel vein sets had been found at surface associated to elevated silver and gold grades reported by a previous operator. The area coincides with a large deformation corridor.

Baroyeca has applied for drilling permits. The 2021 drilling program will seek to expand and better define both the La Ye and Veta Grande zones while target development progresses in the Tavera-Rancho Viejo area. Drill holes will include step-outs to define the potential high-grade shoots.

Change to the board of directors.

Brian Macnish is stepping down from the board of directors effective July 15th, 2021. Brian has been instrumental in preparing Baroyeca to receive the Colombian assets. The Company thanks Brian for his contributions and wishes him the best in his future endeavors.