Sampling was started in 2019 and continued through 2020 by a previous project operator. The sampling process was designed and supervised by a Qualified Person with Baroyeca completing the process to obtain a 500-ton sample.

The Santa Barbara exploratory tunnel has been driven for 150m following a continuous shoot in a gold bearing vein. The vein has been mapped at surface for continuation, dip measurements and strike direction so it can be followed by the tunnel and continued along strike beyond the current tunnel length in the near future. Channel and bulk sampling started at meter 25 from the tunnel portal where a crosscut intersected the gold vein under existing artisanal mining works on surface. Channel samples collected by Baroyeca (see Fig. 1 and Table 1) in 2020 averaged 35.18 g/t Au.

Raul Sanabria, P.Geo., President of Baroyeca commented: “We continue to show the exceptional quality of the projects we acquire and our exploration work at Santa Barbara is clear proof of that. We took the approach of drifting for vein characterization and grades and this has paid off. Having this consistency in high-gold grades over the entirety of the 150m strike length of the tunnel, which remains open, provides an indication of what we can expect to find at depth and in other parallel veins in the project. Additional bulk samples have been started from parallel veins recently accessed by our underground development crosscut tunnels with the vein material to be processed at the Santa Barbara processing plant. The gold recovery should generate enough non-dilutive cash flow to defray most of the overhead costs of the Santa Barbara project while advancing underground exploration.”

The gold mineralized vein averages 0.30m in width (in some areas up to 0.5m thick) and locally splits into two veins which later rejoin. The vein follows a right lateral fault striking N050 dipping steeply to the NW and turning into N030 dipping steeply to the SE towards the tunnel portal (NE). The vein shows between 10% and 60% sulfide content (pyrite, sphalerite, galena, and minor chalcopyrite) in a gangue of quartz, manganese-bearing carbonates and calcite. Chlorite and sericite are conspicuously present as alteration minerals. Breccias and multi-episode banded textures are the most commonly present. 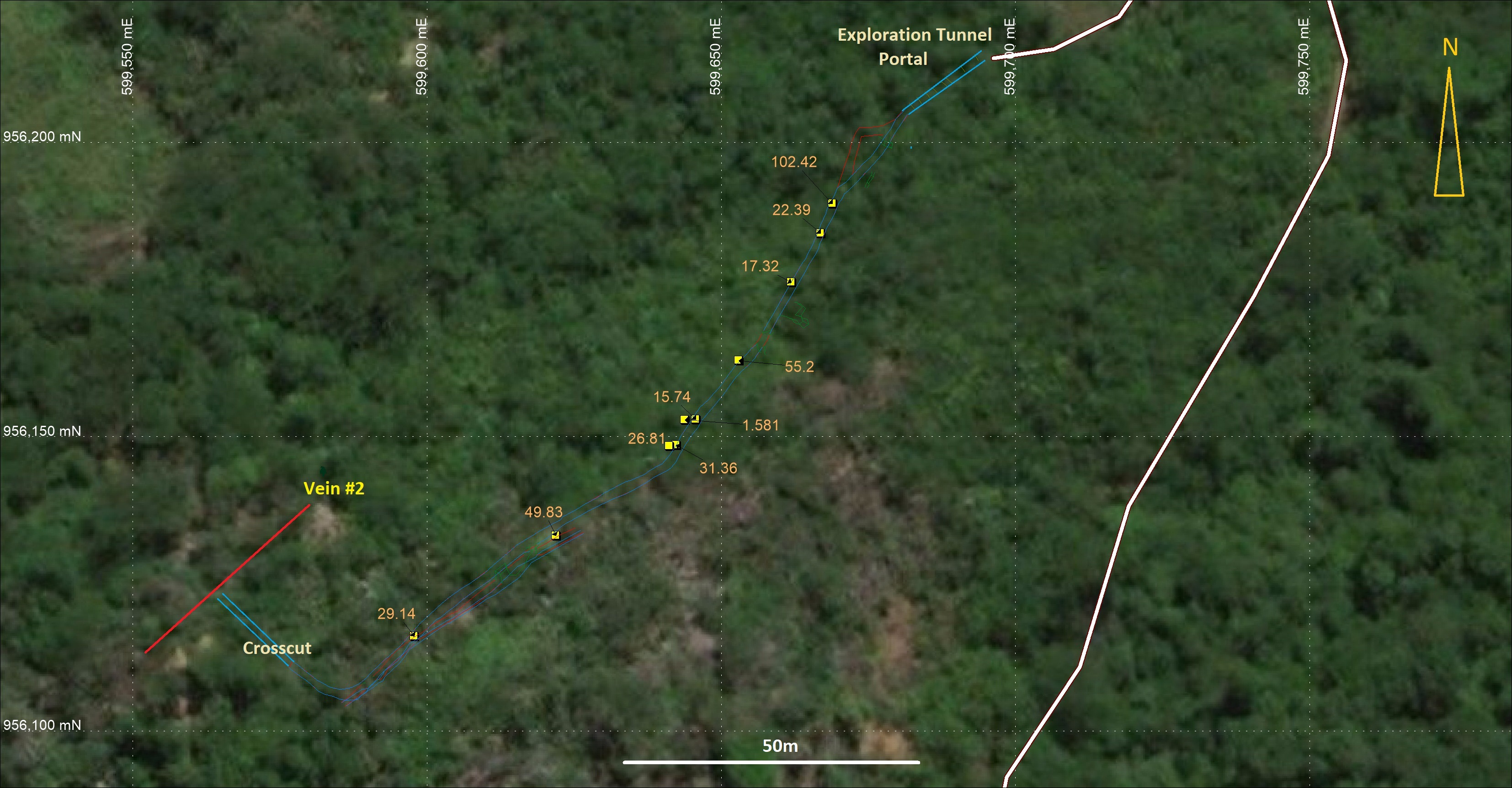 Figure 1. Santa Barbara tunnel trace (blue) over satellite imagery and Au g/t assay results at each location of channel samples collected by Baroyeca in the summer of 2020.

Bulk sample collection was started by the previous operator of the project in 2019, designed and supervised by a Qualified Person for QA/QC purposes, and continued during 2020. Baroyeca continued the process with the same methodology but increased the batch sample from 10 to 15 tons after completion of some improvements and upgrades at the pilot processing plant. Baroyeca collected the last 72.5 tons of vein material since becoming the operator of the project in February 2021 to complete the total milestone of 500 tons of bulk sample (See table 2 below).

The mining method employed at the tunnel consists of splitting the vein from the barren wall rock, separating and collecting the vein material with a minimum of wall rock shoulder attached. The vein material from the tunnel is then bagged at the tunnel portal in woven plastic bags and individually weighed until an approximate nominal 10 to 15 ton batch sized sample is completed. Samples are then loaded in random order in a truck and taken to the Santa Barbara pilot gold processing plant. At the plant site, sample bags are dumped in random order to pass through a first stage of crushing to 2 inch and then a second stage of crushing to 0.5 inch particle size. Crushed material is then stored in a bin with a vibrating door that self-feeds the primary ball mill. Crushed material is then sent to the primary ball mill (>40% passing 150 mesh) and secondary ball mill (>60% passing 200 mesh) connecting with the three 15m3 cyanide leaching talks where the pulp is agitated before adding any reagent for homogenization purposes.

A second bulk sample of a minimum size of 100 ton will be collected from this second vein and if successful in reaching the third vein with the exploration crosscut tunnel, a third bulk sample will be collected and processed at the pilot processing plant. Subsequent channel sampling will be performed at 1m intervals and recorded as the tunnels advance through the veins to cross reference them with the head grades for every 15 ton batch.

Rock samples are shipped by transport truck in sealed woven plastic bags to SGS sample preparation facility in Medellin, Colombia for sample preparation and analysis. SGS operates according to the guidelines set out in ISO/IEC Guide 25. Gold is determined by fire-assay fusion of a 50 g sub-sample with atomic absorption spectroscopy (AAS). Samples that return values >10 ppm gold from fire assay and AAS are determined by using fire assay and a gravimetric finish. Silver is analyzed by inductively-coupled plasma (ICP) atomic emission spectroscopy, following multi-acid digestion.  Silver is determined by ore grade assay for samples that return >500 ppm.