VANCOUVER, B.C. – Baroyeca Gold & Silver Inc. (the “Company”) is pleased to announce the discovery of a widespread system of parallel veins at La Ye target following a large regional structure expanding its current footprint to over 250x500m. Another high-grade both gold and silver mineralized zone was discovered at Veta Grande, returning the best gold and silver assay results during this campaign and also a new mineralized zone was identified lining with the Tavera vein system at the company’s flagship Atocha project in Tolima, Colombia.

Our geology team is working on the development of drill targets while conducting detailed geological/structural mapping. A very robust geological model is being created based on structural interpretation using Lidar DEM created models as a strong foundation that is leading to the discovery of a large number of vein occurrences in a very short span of time. During the first month spent on the ground our geologists largely expanded the known vein system at La Ye and found the continuity towards the west of the historic showings of Veta Grande were historically the highest silver values reported by previous operator (up to 3.48 kg/t silver) come from. Also, a series of sub-outcrops found during this time proved the continuity of the Tavera-Guaduas vein corridor, now showing a continuity in excess of 1,000m.

Exploration during stage 1 was focused on the identification and characterization of different vein exposures, follow their continuity at surface and where possible collect chip samples for high-grade silver-gold mineralization pointing towards mineralized shoots within the veins. The best results (14.4 g/t Au and 420 g/t Ag) came from the western extension of the Veta Grande showings, where both gold and silver values are elevated and extend an extra 100m the length of the identified high-grade shoot. 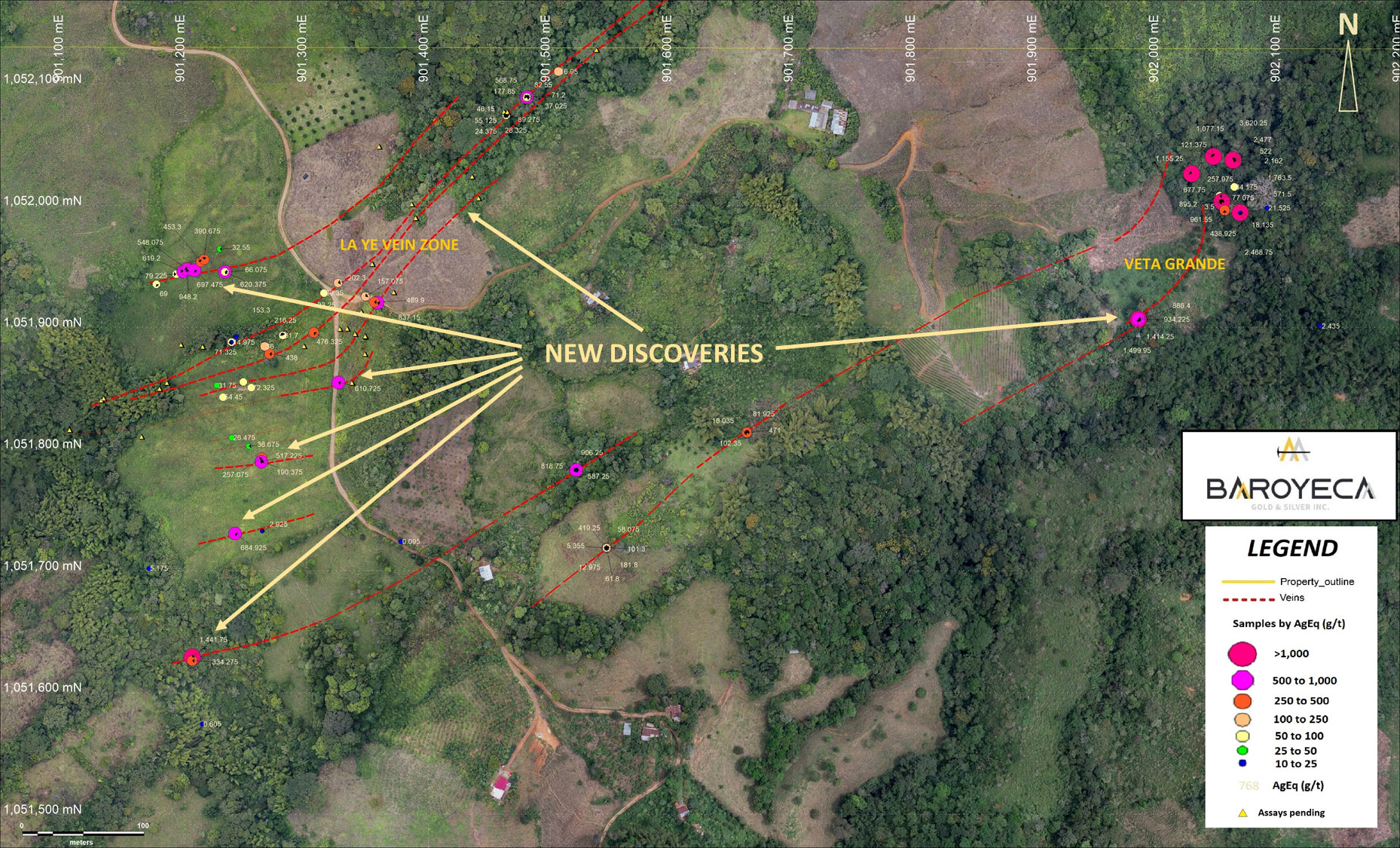 Prospecting along the Tavera-Rancho Grande-Las Guaduas vein system, a series of sub outcrops were found that returned high-grade silver assay results with anomalous gold values (up to 969.3, 726.5 and 658.4 g/t AgEq) in grab samples extending its trend for more than 1km along strike. 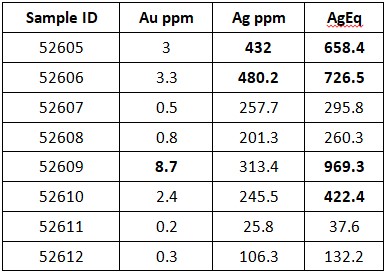 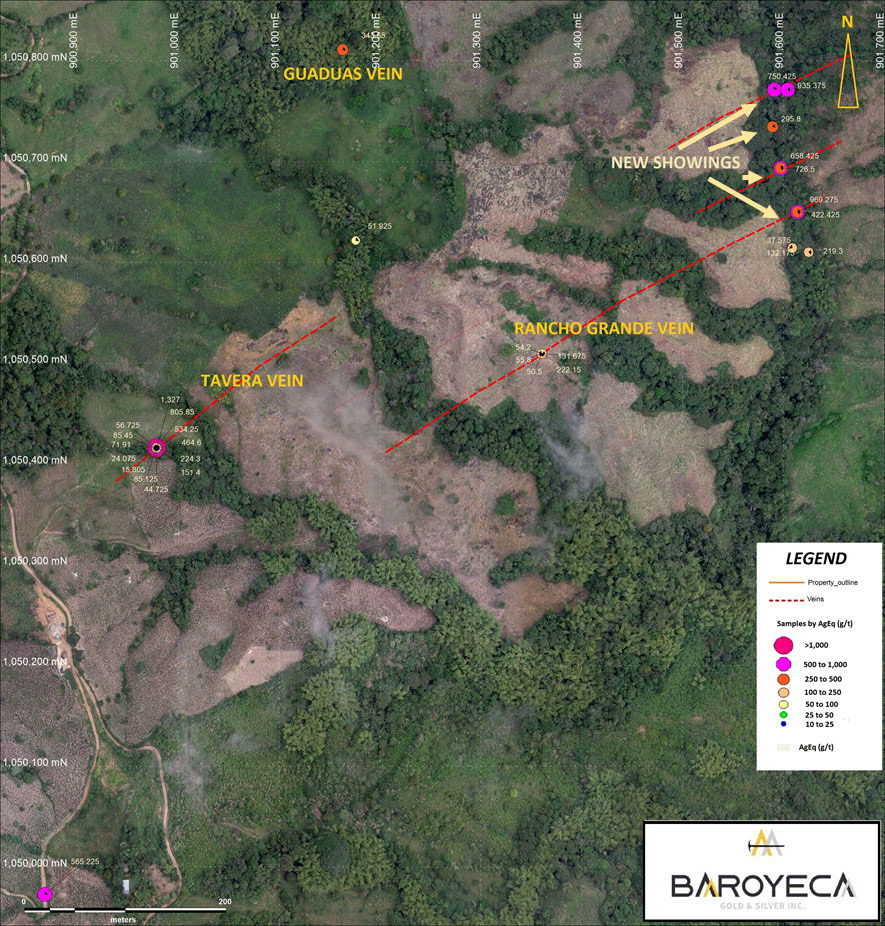 Most of the work performed to date has been focused on La Ye vein zone, where systematic mapping and structural interpretation from Lidar imagery and DEM proved the existence of a major structural deformation corridor. The primary vein system is comprised of at least 6 major veins and several smaller associated veins covering a strike length in excess of 500m, open in both directions. Mapping has been possible due to the existence of a vast number of exposures and outcrop occurrences. Despite these mineral occurrences are located in areas of intense weathering and saprock host, the first batch of rock chips collected at outcrops and sub-outcrops average 182 g/t Ag (or 304.4 AgEq) as per the table below.

The principal veins show widths in outcrop ranging from 50cm to >2m and have a northeast strike and dip moderately to the NW, and secondary splays dip shallowly (10° to 30°). Veins are quartz dominant, showing marked banding with zones of semi-massive sulphides (pyrite, galena, sphalerite and Ag-sulfosalts) up to 30% locally. 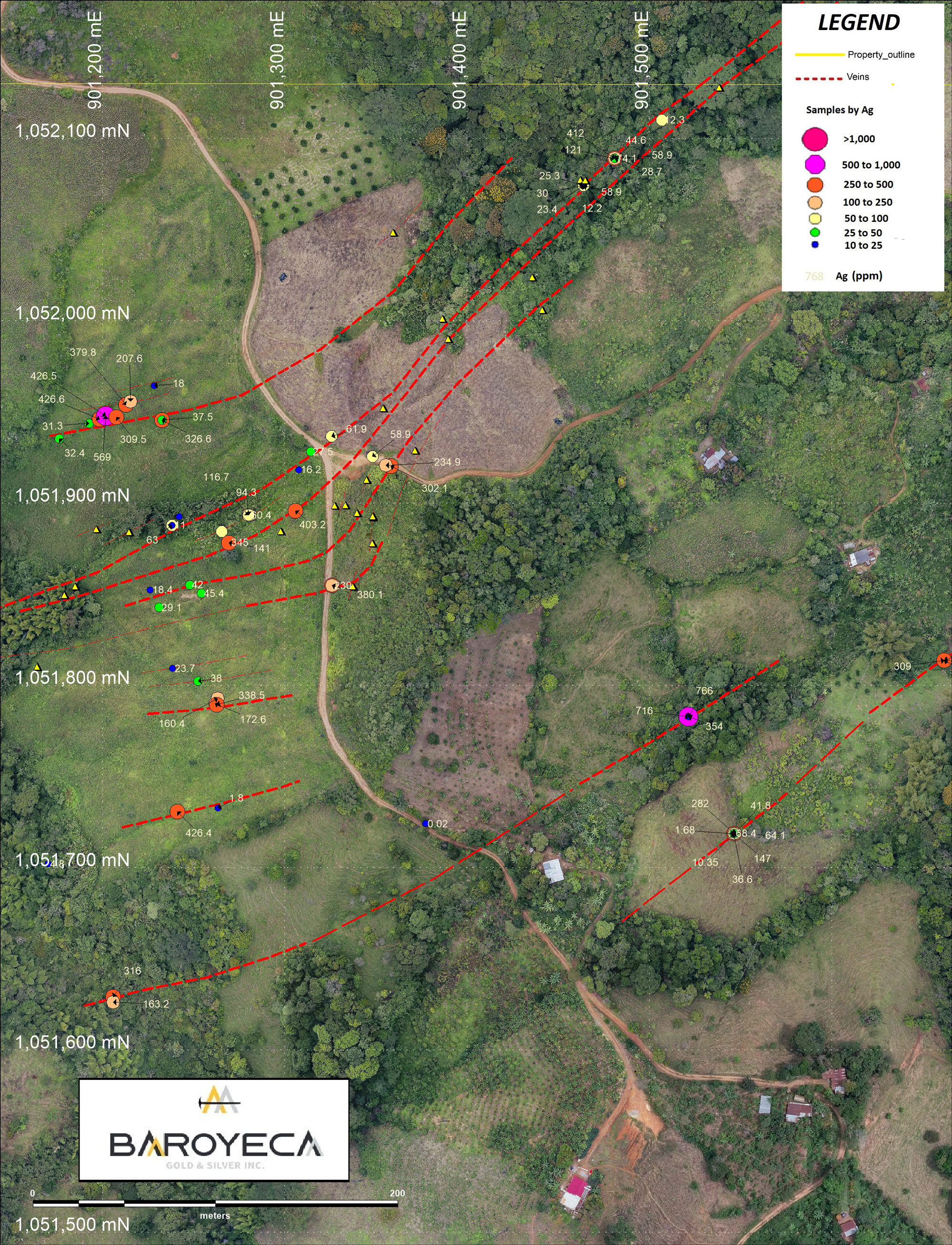 Raul Sanabria, P.Geo., President of Baroyeca commented: “The robust geologic model has been put to a test conducting surface prospecting and detailed mapping on conceptual target zones and the results are exceeding our initial expectations. The current number of veins found around La Ye, returning high-grade silver and gold grades right at surface, are the best proof of the excellent mineral potential of our Atocha flagship property. La Ye and Veta Grande cover just a small portion of the property and they had been chosen for their ease of access to be developed first. Our crews are systematically developing each and every vein showing during the ongoing exploration program. The property is over 2,600 hectares in size, and there are still dozens of high-grade vein exposures all over the property, which is big enough to host a mining district by itself, and the widespread number of occurrences is a proof of its enormous prospectivity”. 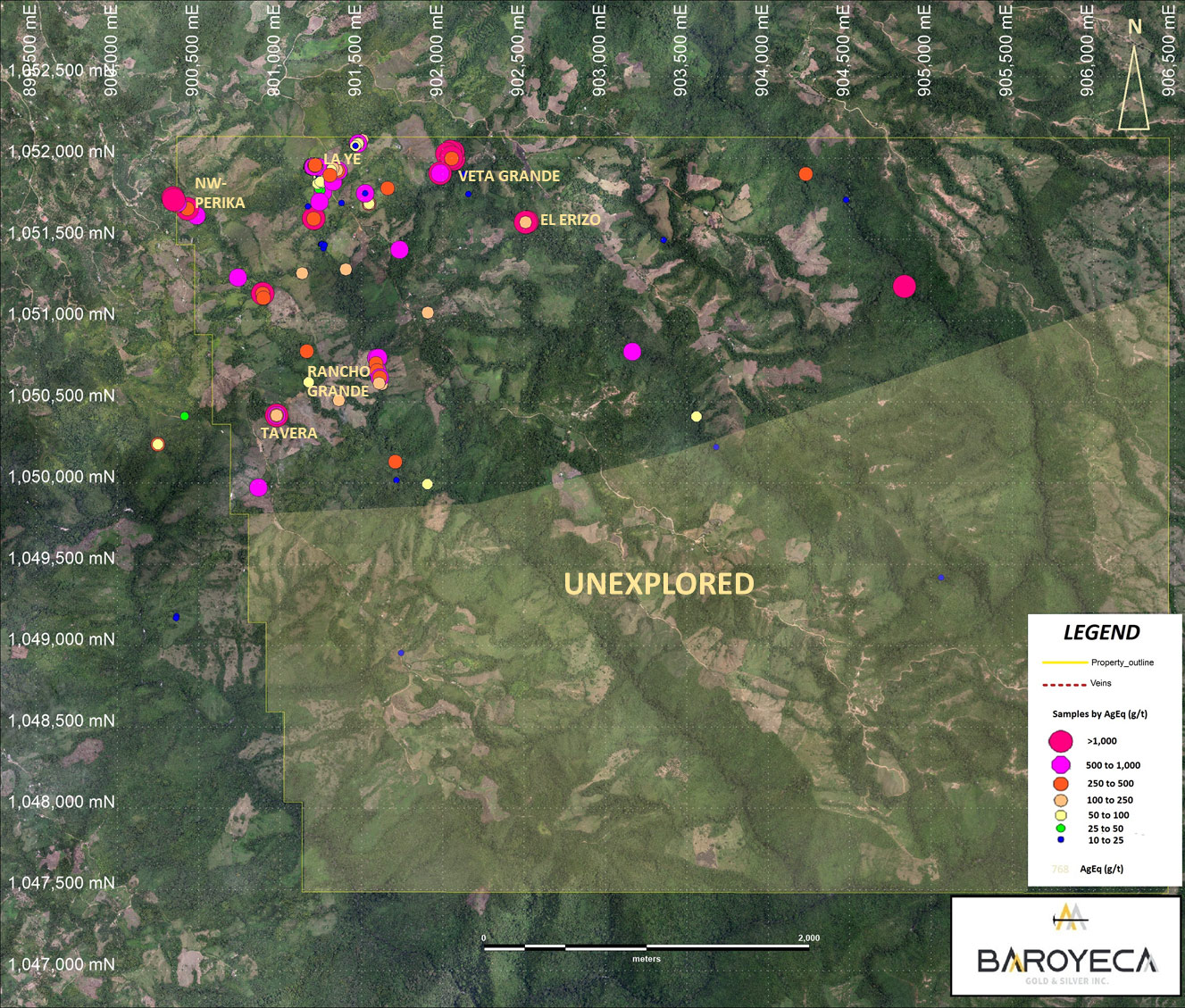 Figure 4. Distribution of mineral occurrences coded by AgEq on the Atocha property to date.

Baroyeca’s field team will continue developing the many regional exploration targets with the same style of mineralization to Veta Grande o La Ye. Extensive geological mapping and prospecting will be carried out this year to advance Baroyeca’s understanding of the geological controls on mineralization and further delineate prospective areas. These targets will be further evaluated during the 2021 program, and the best of them may be chosen for drill testing later in the season.

Baroyeca is currently conducting soil geochemistry programs in select areas of the property that are known to be lacking proper outcrop but fall in trend with known veins and prospective structures, aimed to confirm anomalies that prove the model and provide additional drill targets.

Baroyeca has applied for drilling permits. The 2021 drilling program will seek to expand and better define both the La Ye and Veta Grande zones. Holes will include step-outs to define the potential high-grade shoots.