With this initial sampling program, Baroyeca has expanded the known gold bearing vein system at Santa Barbara through rock sampling over a 500m x 500m area, located on trend with the regional NE-SW structures that host the gold bearing veins in the project area. The 2020 exploration due diligence field program expanded a cluster of high-grade silver-gold veins identified from 2015 to 2018 at the center of the property by the previous operator. The program involved the collection of ten samples with all samples reporting gold grades greater than 7.0 g/t Au. The seven highest grade samples were obtained from a series of rock chip samples taken in three exposures of the veins right at surface, and returned gold values of 13.20 g/t, 13.18 g/t, 11.73g/t, 11.49 g/t, 11.13 g/t, 11.11 g/t and 10.01 g/t Au. Table 1 included below at the end of this release sets out the results of all samples that were collected by the previous operator (the first fourteen) and by the Company (ten samples). Following the table is a map labeled as Figure 1 on which is plotted the location of each of the samples collected and the vein structures identified.

The vein system was recognized by the extensive number of pits and prospects excavated by artisanal miners on the property. Prospecting and conducting a GPS inventory of the artisanal works resulted in the discovery of multiple sets of low to intermediate sulphidation epithermal veins, vein swarms, and siliceous breccias hosted in basement gneisses of the San Lucas Formation. Individual quartz veins typically range from 20 cm to >1.0 m in width, are steeply dipping, and have been traced on surface for up to >250 m along strike with several vein structures interpreted to project beyond their current mapped extent beneath talus and scree cover. Dominant vein orientations are north-northeast.

Rick Wilson President and CEO commented: "We are very pleased with these preliminary results that indicate the richness and continuity of the vein system within our Santa Barbara project. Finding additional veins on the property will allow the expansion of the ongoing bulk sampling program with the expectation of increased gold production from the test mill."

Concurrent with the 2021 prospecting program in the Santa Barbara Property, Baroyeca is planning a field program designed to evaluate continuation of known structures. It will consist of reconnaissance level structural and geological mapping based on Lidar detailed imagery and DEM, prospecting and soil geochemical sampling to evaluate historic showings and to explore for new zones of mineralization.  Induced Polarity (IP) Geophysical surveys are contemplated as part of the definition of structures hosting veins at a property scale. These programs will be undertaken over the next six to twelve months and have been budgeted at a cost of $500,000. The Company has the funds on hand to finance these programs.

Advancing exploration tunnels will continue non-stop and a second vein will be evaluated as a new large size bulk sample (300 to 500 tons). Net revenues from sales of gold produced will be used to defray overhead expenses and the costs of exploration activities.

On February 5, 2021, the Company closed its Mineral Property Option Agreement with Malabar Gold Corp. ("Malabar") pursuant to which Malabar granted the Company an option to acquire a 100% interest in the Santa Barbara Property. Malabar holds the right to the title to the property through a third party who has filed for the transfer of title to Malabar with the Colombian registry. Agreements providing access to the property and the right to conduct the bulk sampling and test milling activities are in place between Sociedad Minera La Fortuna SAS, Malabar's Colombian operating subsidiary, and the third party. In order for the Company to exercise its working right and access to the property provided, Malabar has transferred control of Sociedad Minera La Fortuna SAS ("La Fortuna") to the Company for the term of the option. Leases of the surface rights are already held by La Fortuna and agreements are in place setting out environmental and social protocols and guidelines to be followed while conducting operations on the property.

Rock samples are shipped by transport truck in sealed woven plastic bags to SGS sample preparation facility in Medellin, Colombia for sample preparation and from there by air to SGS facility in Lima (Peru) for analysis.  SGS operate according to the guidelines set out in ISO/IEC Guide 25. Gold is determined by fire-assay fusion of a 50 g sub-sample with atomic absorption spectroscopy (AAS). Samples that return values >10 ppm gold from fire assay and AAS are determined by using fire assay and a gravimetric finish. Silver is analyzed by inductively-coupled plasma (ICP) atomic emission spectroscopy, following multi-acid digestion.  Silver is determined by ore grade assay for samples that return >100 ppm.

About the Santa Barbara Project

The Santa Barbara Project is comprised of 110.86 hectares strategically located in the core of a prolific gold camp next to the Pueblito Mejia Special Reserve Area of Mining (the "ARE") as declared by the the Colombian National Mining Agency (the "ANM"). It is geographically located on the northern tip of the Serranía de San Lucas, also known as the "richest gold belt" in Colombia surrounded by numerous active small-scale mining operations and artisanal miners, indicating the richness of the district. Figure 2 attached at the end of this news release contains a map of the regional geology of the Santa Barbara Project.

Baroyeca Gold & Silver Inc. is a mineral exploration company focused on high-grade silver and gold projects located in Colombia.  Baroyeca's flagship asset is the high-grade Atocha Silver-Gold Project located in Tolima Department, Colombia. The Company also holds an option to acquire a 100% interest in the Santa Barbara Property, Bolivar Department, Colombia, which is renowned for its high-grade gold mineralization and vein density. Current exploration activities on the Santa Barbara Property involve the bulk sampling of vein structures, which material then feeds into a trial production facility which has consistently been producing gold for over a year. The revenue from the sale of produced gold defrays part of the operating costs. The Company is planning to expand these activities. 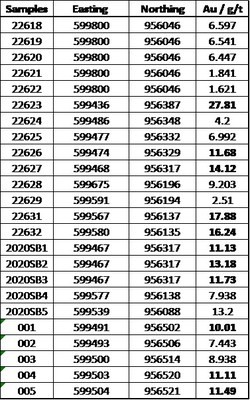 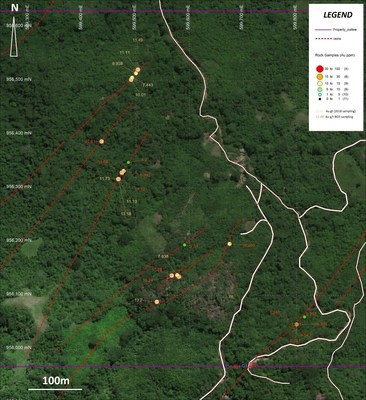 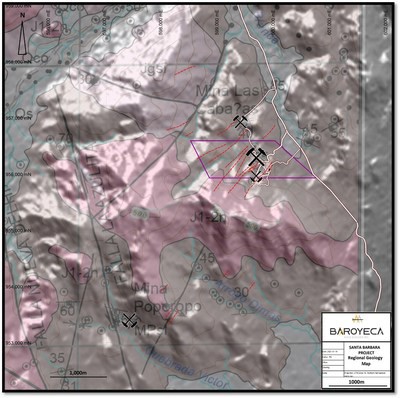 Figure 2. Geological map around the Santa Barbara property (Source: Ingeominas) indicating location of past and currently producing mines, and known veins identified within and in the immediate areas around the Project (red dashed lines).