The Company announced on February 5, 2021 that it had closed its agreement with Malabar Gold Corp. (“Malabar”) whereby Malabar granted the Company an option to acquire a 100% interest in the Atocha property (formerly referred to as the Falan Property). The agreement with Malabar granted the Company access to, and a working right over, the property. At closing, title to the property was still registered in the name of a third party, however, documents transferring title to Malabar had been filed in the appropriate registry, recording of which will occur in the usual course. To assure access and the working right are effective during the time until the registration of title is completed, the Company has negotiated agreements with the registered party providing for full access to the property and complete control over proposed exploration to be undertaken on the property. To assist the Company in carrying out work programs on the Atocha Project, Malabar has agreed to transfer control of its operating subsidiary, Minera La Fortuna SAS, to the Company. The current preliminary geological work being conducted by the Company does not require permitting from the regulators in Colombia and the Company has informal agreements with the land owners to access and conduct this work due to the small amount of land disturbance involved. Additionally, there is an agreement in place for the general area setting out environmental and social protocols and guidelines to be adhered to when conducting work programs.

This high-grade silver-gold vein field was discovered through rock sampling over a 5,000m x 4,000m area, located on trend and south of the historic Santa Ana and El Cristo colonial silver mining district, and immediately east of the Frias colonial silver mine.   The 2020 exploration field program expanded a cluster of high-grade silver-gold veins identified by previous operator Condor Precious Metals Inc (“Condor”) in the northwestern corner of the property from 2012 to 2018 (See “Historic Results from Atocha Project” below in this release).

Baroyeca performed a first round of due diligence and reconnaissance in late 2020 resampling two of the zones previously sampled by Condor (11 samples) and identified two new vein zones named Perrika- Cucharo, and El Erizo from which they collected 15 samples. The two rock chip samples from Veta Perrika returned 5.70 g/t Au and 696 g/t Ag and 6.91 g/t Au and 510 g/t Ag respectively. Of the five samples from the El Cucharo vein, three returned higher gold values than Veta Perrika, 17.59 g/t, 15.01 g/t and 10.89 g/t Au together with significant silver values of 168.7 g/t, 187.2 g/t and 217.6 g/t Ag respectively. Rock sampling at El Erizo vein (7 samples) returned silver values all 109.9 g/t or higher with the top three samples reporting 951 g/t, 839 g/t, and 691 g/t Ag. Gold values were lower in this zone ranging from 0.36 g/t to 2.22 g/t (See “Table 1” attached for the analysis of all samples collected.) The reader is cautioned that these results set out above are from the analysis of grab rock samples which by their nature are selective and not necessarily representative of mineralization hosted on the property.

Rock samples are shipped by transport truck in sealed woven plastic bags to SGS sample preparation facility in Medellin, Colombia for sample preparation and from there by air to SGS facility in Lima (Peru) for analysis.  SGS operates according to the guidelines set out in ISO/IEC Guide 25.  Gold is determined by fire-assay fusion of a 50 g sub-sample with atomic absorption spectroscopy (AAS).   Samples that return values >10 ppm gold from fire assay and AAS are determined by using fire assay and a gravimetric finish. Silver is analyzed by inductively-coupled plasma (ICP) atomic emission spectroscopy, following multi-acid digestion. Silver is determined by ore grade assay for samples that return >100 ppm.

Prospecting work is ongoing on the Atocha property and several other vein exposures had been found in the northern half of the property in the Jimenez and Socorro creeks, as well as parallel vein sets around the Tavera-Las Guaduas veins in the Santa Agueda creek. Collectively, these results map out a wide corridor hosting a vein field consisting of parallel silver-gold bearing veins over a 5km x 4km area referred to as the “Atocha Corridor” where the current accumulated strike length of identified veins exceeds 25km.

Rick Wilson President and CEO commented: “We are very encouraged by the exceptionally high to “bonanza” silver grades combined with the also good gold values in our first round of reconnaissance sampling across the Atocha. The high-grade and widespread nature of the mineralization of Atocha Project indicates the elevated potential for making additional mineral deposit discoveries along the “Atocha Corridor” mineral trend.”

Concurrent with the 2021 prospecting program already undergoing in the Atocha Property, Baroyeca is planning a broader field program designed to evaluate regional targets on the full 2,500ha property. Work at the Atocha Property will consist of reconnaissance level structural and geological mapping based on Lidar detailed imagery and DEM, prospecting and geochemical sampling to evaluate historic showings and to explore for new zones of mineralization.  Rock sampling and contour soil sample lines will be collected in addition to the structural modeling currently ongoing. The work program will be undertaken over the next four to six months at an estimated budget of $250,000. Funds to finance the program were raised in the Company’s recent private placement of 9,200,000 units at a price of $0.22 per unit.

The  Company  is  waiting  on  receipt  of  additional  assay  results  from  the  January-February  2021 prospecting program. Results for surface sampling program will be presented at a later date pending receipt of additional assay data.

The new Ag-rich vein field (“Atocha Corridor”) was discovered through follow-up of positive results generated during a short reconnaissance program in late 2020 and detailed structural regional DEM analysis from available satellite imagery. The new discovery consists of multiple sets of low-sulphidation epithermal crustiform quartz veins, vein swarms, and siliceous breccias hosted in basement graphitic, amphibolitic and sericitic schist of the Cajamarca formation. Individual quartz veins typically range from 20 cm to >1.0 m in width, are steeply dipping, and have been traced on surface for up to >250 m along strike with several vein structures interpreted to project beyond their current mapped extent beneath talus and scree cover. Dominant vein orientations are north-northeast.

Veins within the new vein field have significantly higher silver to gold ratios, with multiple samples in excess of 100 g/t Ag up to 3480 g/t Ag, together with high-grade gold in grab samples. It is interpreted that the veins represent the high-level silver rich uppermost part of a large epithermal mineral system. In addition to their potential for high-grade silver, these veins are important targets at depth where they project into underlying structures hosting most of the high-grade gold mineralization elsewhere in the district.

The maps attached to this release as Figure 1 and Figure 2 show the location of sample results obtained to date.

Background History of the Atocha Project

The Atocha project consists of 2,585 ha of highly prospective ground covering a significant part of the Mariquita-Santa Ana-Frias District where mining records date to at least 1585.

Historically, the region is famous for precious metals extraction by the indigenous people, who extracted native gold from unconsolidated Recent-Quaternary sediments, alluvial sediments and underground mining. Following the Spanish Conquest, more formal mining commenced, with extraction of gold and more importantly, silver specifically around the town of Falan to the North of the project. During the time the Spanish operated the mines, silver grades were reported to be some of the highest in Latin America.

The average smelter return for silver ore during those days was "4 marcos per quintal" (equal to approximately >17kg/ton Ag), according to official reports of Hacienda Santa Fe (year 1585), and reported widths exceeding 1 1/2 varas (4 1/2 feet).  Subsequent exploration discovered some more veins in the Santa Ana (today Falan) and Frias regions, adding 14 new mines to the district, all of them producing over one marco of silver per quintal (approximately 4.3kg Ag per ton). The heyday of the Santa Ana and Lajas mines was between the years 1585 and 1620. In 1795 the King of Spain suspended all mining operations in the area due to the financial and material losses from mineral processing, which in part related to conflicts with the Amerindian workforce, the increase of labour costs, and the lack of production from the Spanish themselves. Spanish mining was superseded by the British in 1824 when a 50 year lease was granted to Herring Graham and Powles.

All exploration conducted on the property from 2012 to 2014 was carried out by Condor Precious Metals Inc.  A series of Ag-(Au)-polymetallic veins were discovered by Condor geologists prospecting in the north-west  corner  of  the  property.  Vein  exposures  noted  in  creeks  are  predominantly  ENE-WSW oriented, with sub-vertical dips, and hosted in dark grey weakly chloritic and/or chlorite-graphite schist within more quartz rich sediments.

Baroyeca Gold & Silver Inc. is a mineral exploration company focused on high-grade silver and gold projects located in Colombia.   Baroyeca’s flagship asset is the high-grade Atocha Silver-Gold Project located in Tolima Department, Colombia. The Company also holds an option to acquire a 100% interest in the Santa Barbara Property, Bolivar Department, Colombia, which is renowned for its high-grade gold mineralization and vein density.  Current exploration activities on the Santa Barbara Property involve the bulk sampling of vein structures, which material then feeds into a trial production facility which has consistently been producing gold for over a year. The revenue from the sale of produced gold defrays part of the operating costs. The Company is planning to expand these activities. 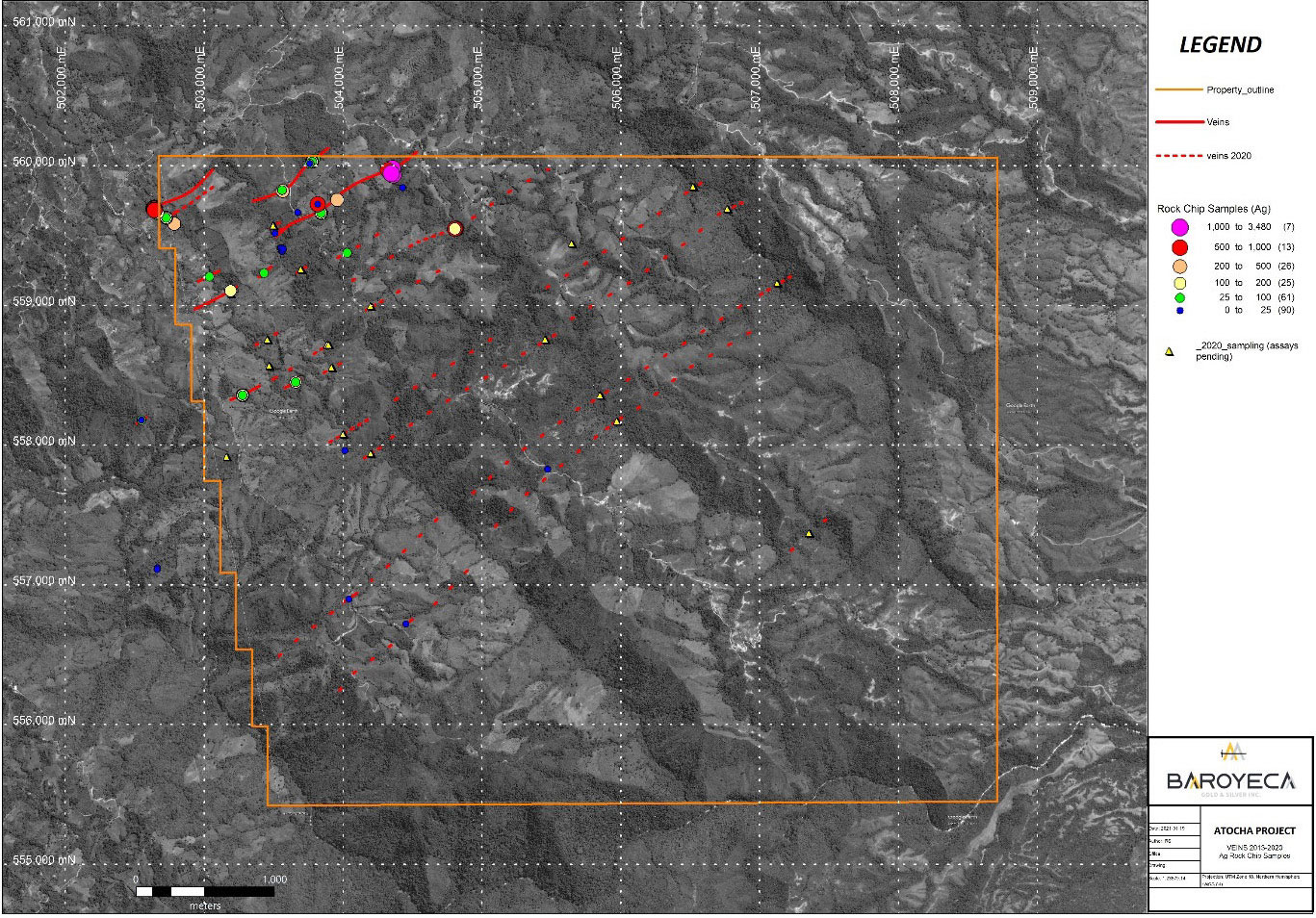 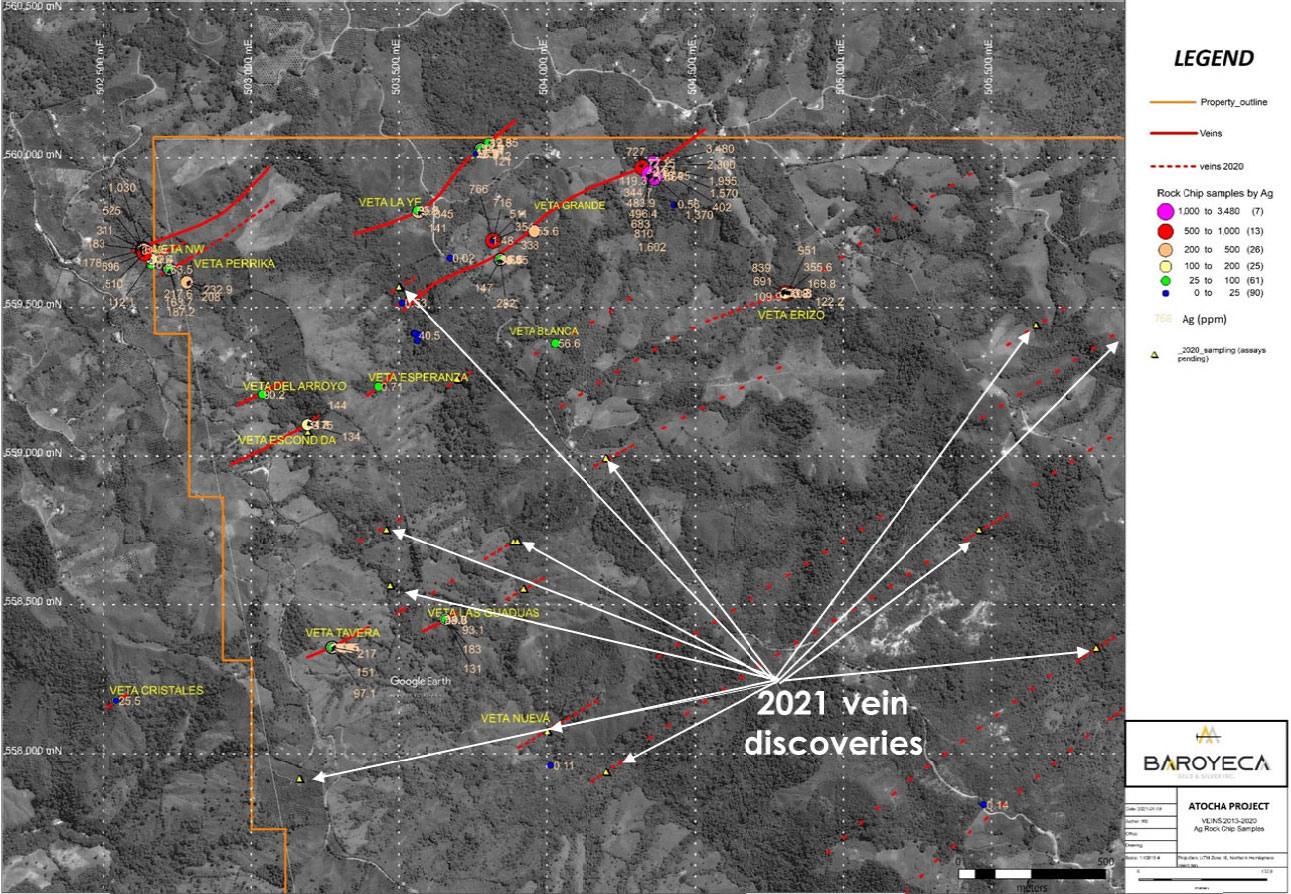